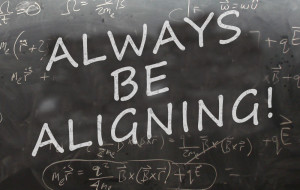 Allow me to destroy a major misconception about sales for you: Closing isn’t everything. It’s an important step in the process, but it’s not the winner-take-all endgame many inexperienced salespeople believe it to be. Closing a sale — particularly when it’s an initial sale with a new customer — should mark the start of a relationship, not the end of contest of wills.

As I mentioned in a previous post, my biggest issue with the “ABCs of Sales” approach is the puzzling emphasis on closing. It implies that sales is fundamentally about delivering a knockout punch to the customer, or that it’s something of a deception-driven, non-consensual relationship between the salesperson and their prospect. That’s a terrible way to build a customer base, particularly if you’re running a business where long-term contracts, renewals or subscriptions play a major role.

I’m not a fan of any sales system where the exclusive focus is on closing the deal. It creates a dynamic that feels completely unnatural, and it makes it almost impossible to build a real feeling of trust. It’s an approach that only makes sense for fly-by-night companies moving a product that they know is complete junk.

If closing isn’t the key to great sales, what is? In an earlier post, I mentioned that I’ve personally had great success with an alignment-based approach to sales. Let’s take a deeper look at how this process works.

Sales is no different. You’re offering a product or service that benefits the customer or solves a problem for them, and they offer something of value back — usually money. As long as both parties are getting their needs met, you’re in alignment. Focusing on finding and developing that alignment, rather than getting a potential customer to sign on the dotted line, is the key concept in an alignment-based sales approach.

This brings me to my own take on the “ABCs of Sales” concept, the “ABAs of Sales,” or “Always Be Aligning.” It’s a simple disciple that forces you to always find those points of mutual benefit when talking to a prospect. It’s a far more comfortable way to interact with a prospect, because it’s creating a win-win interaction by design.

When you’re looking for alignment, you can’t have a win-lose situation. If you’re mutual needs simply can’t be aligned, the result generally isn’t a failed sales pitch. It’s almost always a disqualification of that prospect, because their needs weren’t in alignment with what your business provides.

This is more than a philosophical shift, or a big-picture view. It’s a testing and benchmarking tool for adjusting your approach on the fly. As you interact with the prospect, it forces you to ask yourself “How is this activity or action aligning to both my interest and the prospect’s?”

You can even take this a step further, taking the occasional time out of the sales process to ask the prospect if what you’re presenting is still aligned with their needs. Establishing this open line of communication helps to eliminate the guesswork of the sales process for both parties. This helps to prevent mistaking an emotional read on an interaction for actual insight, replacing the “I believe we’re close to a sale” feelings with concrete statements from the prospect themselves.

Asking the prospect if you’re still aligned eliminates all the stress of that uncertainty, and allows you to course-correct your approach as you go.

In the next post in this series, I’ll go into deeper and more specific detail about applying the alignment-based approach in your sales interactions.