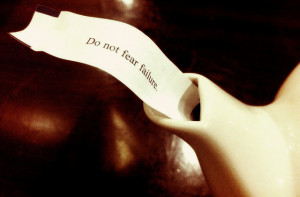 Most startups fail. That may seem like a strange sentiment coming from a business coach and self-proclaimed serial entrepreneur, but it’s the truth. A big part of being a successful entrepreneur is becoming comfortable with the reality that you might pour your heart and soul into a business, only to see it crumble right in front of you.

At the same time, failure isn’t a bad thing. As I explain below, failure can actually be one of the most valuable entrepreneurial experiences you could ask for. It can be a powerful teacher. But to get the most out of failure, you need to understand what it is, and to prepare for it before it happens. In this post, I’m be talking about the six most important things to remember about failure as you prepare to launch your business.

1. Failure is part of the game. This may be a little counterintuitive, but failure is a fundamental part of the startup process. Startups fail far more than they succeed, even with experienced founders at the helm. You never want it to happen, but inevitably it will. It’s almost a rite of passage in the startup world.

I didn’t become a business coach because I’ve never made a mistake and all of my companies were instant successes. Some of my companies have been successful, but others have failed spectacularly. Ask even the most successful entrepreneurs, and they’ll tell you the same thing. Name an iconic entrepreneur — from Walt Disney to Col. Sanders — and you’ll find that their biographies are packed with failures.

Smart investors know this, which is one reason why many of them won’t invest if the founder hasn’t yet had a failed business. Failing teaches you some important lessons, and it helps you develop the scar tissue you need if you want to do this as a career. In a strange way, having a few failed businesses under your belt is a great indicator that you’re actually doing something right.

2. Failure doesn’t always mean catastrophe. Not all failures are total losses. Some failures are exceptionally valuable as learning experiences, while others are simply part of the process as you move towards a successful business. In that sense, it helps to think of your business as a kind of entrepreneurial R&D.

Research and development departments exist to test ideas. It’s about trial and error, testing out new things to see if any of them can be turned into viable products. A single eventual success may come at the cost of dozens — or even hundreds — of failures.

The same thing is true in sales. Getting to a “Yes” in sales means hearing a lot of “No”s. It’s part of the process, and while each individual sales presentation may result in a failure to close a deal, success is judged on a percentage. Looked at over a long enough time scale, each failed business is very similar to a failed experiment or sales pitch. It’s the cost of getting to that eventual success.

3. Failing is often a good thing. I know that sounds crazy, but stick with me for a moment. As people, and particularly as entrepreneurs, we’re optimistic by nature. Our desire is to succeed, and by definition that means avoiding failure. So why is failure sometimes a desirable outcome? Failing teaches you a hell of a lot, if you let it. It makes you stronger. When you get knocked flat-out cold, you either get up and dust yourself off, or you give up.

That process tests your mettle. It forces you to really consider if being an entrepreneur is really a good fit for who you are. One of those outcomes — and it’s by no means a bad one — is that being an entrepreneur isn’t a good fit for you. If you’re not cut out to create and run businesses, there’s no shame in that. That’s also something you can really only learn by trying and failing.

Starting business is an exceptional thing. Most people won’t even try it once, and even less will try it again after their first attempt fails. If you learn the lessons that come from failure, you start to see how the process works, and you open yourself up to opportunities you could never have seen before.

4. If you’re going to fail, it’s best to fail quickly. I’ve never heard an entrepreneur say “Boy, we really crashed and burned on that business. I only wish we could have drawn it out a little more, so that it took us another six months longer to completely fail.” If anything, that founder would regret not cutting their losses a lot sooner.

Even when the handwriting is on the wall, you may be in denial about it. Don’t try to save it. Recognize it, face it, and let it fail quickly. The faster the failure, the more quickly you can recover.

Don’t misunderstand me: I’m not saying throw in towel at the first sign of trouble. Being a successful entrepreneur means sticking things out, even when the weather gets stormy. But when a business legitimately fails, don’t try to keep it on life support. Let it fail quickly, take the hit, and then get back to work.

5. When you fail, fail gracefully. There’s an old expression that says “Don’t throw good money after bad.” A few weeks ago, I said this to one of my interns, and they didn’t understand it. What is bad money, and what does it mean to throw bad money after it?

In the context of a startup, bad money is everything you and your investors spent on trying to making a failed business work. It’s a loss, essentially. When a business is failing, you might be tempted to raise even more money in an attempt to keep it going. Every new dollar you raise or invest in a failing business is good money that’s following bad money.

Why waste that money? Why try to save a failed concept? Why burn outside investors on an business you know is going to collapse eventually? Why take on additional personal debt to prop up a company that is on its last legs? Often, this come down to ego, and it can have quite a price tag if you let it.

Failing gracefully also means not letting the collapse of the business take your confidence and your sense of self-worth with it. It’s not fun to fail, but you can’t let it destroy you. It’s going to hurt, but you’re going to be better for it.

6. Don’t be caught unprepared. I have a good friend who is a pilot. Once, he told me that he never goes into the air intending to crash land, but if it happens he’s prepared for it. He knows the procedures, and he’s as ready as one can be if disaster strikes. If he has to navigate the plane into the ground, he’s going to do it as safely as possible.

The same is true when you start a business. The better prepared you are for failure, the more likely you are to come out of it in reasonably good shape. This means having backup plans. It means knowing — at least in a general sense — things like how you will pay your mortgage, lay off employees or file bankruptcy if you need to.

Remember: Any landing you can walk away from — even a crash landing — is a good one.